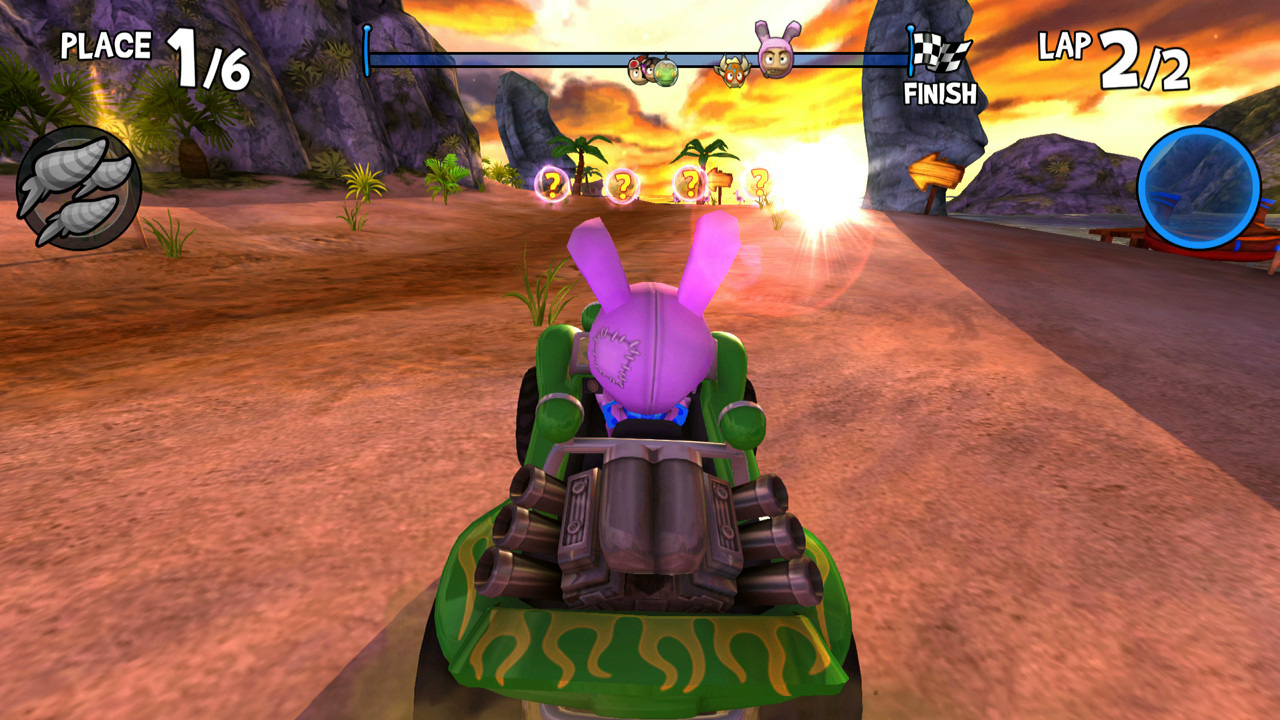 ICYMI (or In Case You Missed It, if you’re an old fart like me) is my new video review series looking at games that for whatever reason weren’t fully covered in bigger sites. The video is below, if you want the written version you’ll find it after the jump.

You can count the number of kart racing games on new-gen consoles on one mitten, and even then you’re pretty much limited to Wii U, what with Mario Kart 8 and Sonic & All-Stars Racing Transformed.

Beach Buggy Racing by Vector Unit is an attempt to right this wrong, even though it technically doesn’t count: you see, while it’s now available on Xbox One and PS4, it was originally a mobile game.

Given its mobile roots you’d imagine it may have been plagued with horrible low-poly graphics but Beach Buggy Racing doesn’t actually look terrible. Let’s be realistic: it’s obviously no Phantom Pain, but its tropical tracks are colourful enough to get the job done.

Kart games are often sold on the strength of their characters, and since Beach Buggy Racing isn’t a licenced product it obviously suffers here.

I’ve put about 20 hours into the game and the only reason I can remember the racers’ names is because I’m staring at them right now. It’s hardly that other one… you know, the Nintendo one, I can’t remember its name.

One advantage it does have over Mario Kart though – and I promise that’s not a phrase you’ll hear again for the rest of this review – is that each character has their own special move unique to them.

These special moves are pretty powerful, but like a United Colours Of Benneton ad you only get one in each race.

More disappointingly, they’re not exactly equal either. Beach Bro’s daft wee beach ball thing is nowhere near as devastating as Ogg-Oog’s voodoo thingy or Benny’s carrot gun, meaning when you eventually unlock everyone you’ll only realistically have one or two characters worth playing as.

The racers are pretty forgettable, then, but the tracks fare a little better. Each has at least one shortcut that will make life easier for you if you can master it, and they’re generally pleasing enough to race along even though the wide roads and turns were obviously designed for a phone’s tilt controls.

What’s less enjoyable is the way the game is constantly trying to level the odds. Many would refer to this as rubber-banding but a lot of people use that phrase without really knowing what it means. There are multiple ways of making a racing game unfair and rubber banding – in which the cars behind you get inexplicably faster so they can catch up – is only one of them.

Beach Buggy Racing doesn’t do this: if you take a good lead and navigate each turn properly opponents won’t magically catch up to you.

Instead though it constantly tries to hit you with cheap power-ups, be it confusion rays that reverse your controls, gravity bombs that make you float in the air or, of course, the inevitable blue shell equivalent, here represented by a screaming bat thing that flies up to whoever’s in first place and waps them in the baws.

In fairness, you can block it with a shield, but you’re likely to get hit with two or three per race so the likelihood of you being able to block them all is low. Which is shite. Not rubber banding, mind, but still shite.

There are two main gameplay modes in Beach Buggy Racing. Championships are your standard Mario Kart style efforts, in which you take part in a series of races to try and earn enough points to finish first. Pretty basic stuff.

Then there’s the Career, which has you entering progressively more difficult series, each consisting of a number of events. These range from standard races to elimination races – you know, the ones where the person in last is knocked out – to time-based ones where you have to shoot a certain number of targets or ram a certain number of enemies within a time limit.

Of course, none of this is redefining the genre, not by a long shot. It’s merely designed to keep things a little more interesting and hold your attention for a little longer. And it works to an extent.

Being completely honest, if I wasn’t an Xbox achievement-obsessed wanker I’d have been done with Beach Buggy Racing long before the 20-odd hours I eventually spent on it. While it serves a purpose it’s fairly generic stuff, and playing the same fifteen tracks over and over again in Career mode gets boring long before you reach the end.

I wouldn’t go out of my way to get Beach Buggy Racing, then, but if you’re a fan of karting games and you see it for a couple of quid during one of the weekly Xbox Deals With Gold sales then you might as well take it out for a spin. Get it? For a SPIN! Hahahaha!