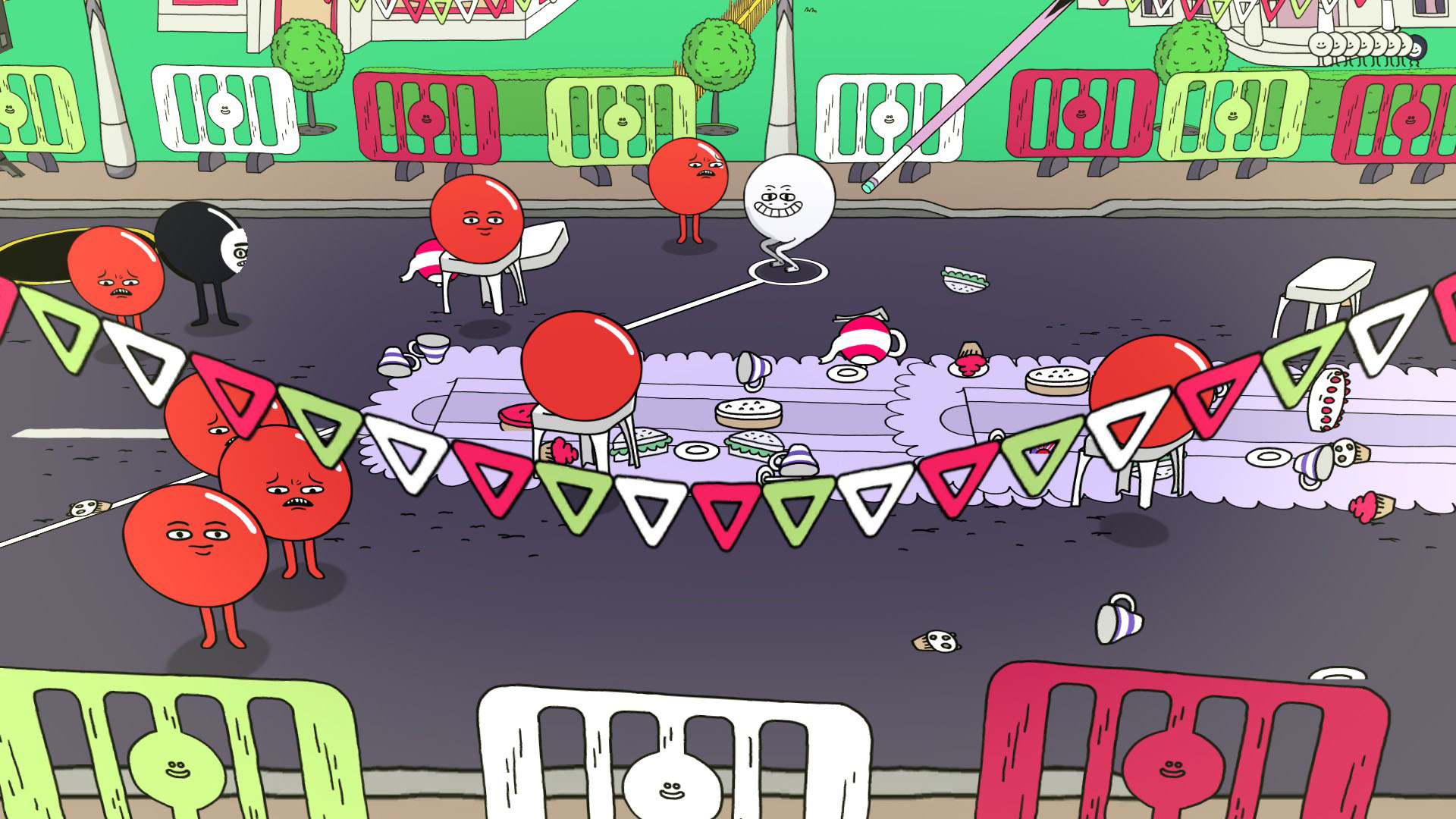 It’s time for another review round-up, in which I give my thoughts on the games I’ve managed to squeeze in during baby naps.

In this round-up yer man Scullion:

• Plays with some balls in Pool Panic
• Attempts another square meal in Picross S2
• Finally gets the joke in Miles & Kilo
• Is grateful to have a halo in F1 2018
• Gets down to some free-to-play fighting in Disney Heroes: Battle Mode

Adult Swim Games has been steadily releasing a bunch of quirky, impressive games lately, and Pool Panic is the latest to catch my eye.

Dubbed as “the world’s least realistic pool simulator”, it’s actually more of a puzzle game as you work your way through a series of levels trying to pot all the balls on the screen.

There are a number of twists. Firstly, your ball has legs, meaning you can freely walk around the level to try and get a better shot. Secondly, the other balls have different characteristics depending on their colour: some will jump out of the way at the last minute, others will run away in fear and so on.

As the game progresses things get even less sensible and you eventually end up in situations where you have to figure out how to find and reveal the balls first before you can even think about potting them.

The sheer inventiveness on display here is impressive stuff, and even as you reach the end of the single-player campaign you’re still being bombarded with new ideas, many of them hilarious.

It isn’t perfect, though: the lock-on control system can be a bit annoying at times, and some of the secondary missions in each level are infuriating, meaning if you want to 100% the game you’re going to have to be ready to turn the air blue.

Not without its faults, then, but a high-quality and extremely funny game nonetheless.

As a huge fan of Picross games, I was extremely disappointed by Picross S on the Switch.

It seemed that by moving the series to Nintendo’s new system, developer Jupiter had decided it was allowed to ditch all the features it had introduced over the course of the eight-game Picross e series on 3DS and start all over again with a bare-bones effort.

Thankfully, Picross S2 goes some way to making up for this by adding one of these missing modes back in again. Well, sort of.

One of the highlights of the Picross e series was Micross mode, in which you filled in a bunch of smaller puzzles to make one massive image. Although Micross was missing in Pircoss S, it’s now here in the form of a ‘new’ mode called Clip Picross.

Basically, any time you complete a group of puzzles in the normal Picross mode, you’ll unlock smaller puzzles in Clip Picross, allowing you to put together a large picture as before. It’s the same sort of idea, just presented in a different way.

If you’re relatively new to Picross this is as good a place as any to start. If you’ve worked your way through all eight Picross e games and tolerated Picross S too, though, the fact that S2 is more of the same may start to grind your patience a little.

While out flying in his plane one day, a young lad called Miles goes off-course and finds himself flying over a haunted island.

After a spectre causes him to crash his plane, it’s up to Miles – along with his trusty dog Kilo – to make his way across the island and get the missing pieces of his plane back from the ne’er-do-wells who’ve stolen them.

This is all just an excuse for a standard side-scrolling platform game, where you make your way through a series of stages and defeat a boss at the end of each world.

Where the game really stands out, though, is in its ranking system. You can happily trot through the game at your own pace if you want, but in order to get an S-Rank for a level you have to beat it within a tight time limit, while collecting all five special coins and finishing with a full fruit meter.

What this essentially means is that you’ll need to pull off a perfect run to get that S-Rank, and that’s where Miles & Kilo becomes a brilliant challenge for those who like their platformers on the difficult side.

It isn’t the longest game in the world – if you’re good at platformers you’ll be able to S-Rank every stage in a couple of hours – but I thoroughly enjoyed it while it lasted.

Last year I questioned Codemasters for continuing to stick with a numbering system that’s a year behind everyone else.

Outrageously, it’s decided to ignore me and is stubbornly sticking with its anachronistic ways, meaning alongside the likes of FIFA 19, Madden 19, PES 2019 and WWE 2K19 we now have the latest Formula One game, F1 2018.

The 2017 instalment overhauled the Career mode, adding a new upgrade system where you could earn over 100 improvements to your car over the course of a number of seasons. While it was welcome, it was maybe a tad too overbearing.

This year Codemasters has dialled it back a little, letting you get upgrades quicker and hiding away some of them until later seasons to lessen that daunting “oh shit, this is going to take forever” feeling.

The rest of the game is mostly a natural evolution of the already fantastic 2017 edition. There are more classic cars, new rules (like the safety halo on each car) and the addition of post-race interviews: though these do start to get a bit repetitive since they turn up constantly.

F1 2018 doesn’t turn the series on its head or anything, but there are enough new changes and improvements in here to justify die-hard F1 fans making the upgrade. This now replaces F1 2017 as the best F1 game money can buy… until next year, of course.

The latest in an endless series of licensed mobile RPG-lite games, Disney Heroes soft-launched as a beta back in February and is now available to everyone.

I’ve been playing it since March and I’m still dipping in on a daily basis, which can only be a good sign.

The general idea is that you build a roster of Disney characters – including representatives from the likes of Monsters Inc, Toy Story, Wreck-It Ralph, Moana, Tron and Pirates Of The Caribbean – and choose five to battle on your behalf in a series of different battle modes.

The more you fight, the more coins you earn, which can then be spent on upgrades and experience boosts for your roster.

It’s your typical slow burn game where patience is a virtue (and a money-saver), meaning you’re likely to get the most out of it if you’re the sort of person who doesn’t mind a quick 15 minutes on it as part of your morning and evening ritual, letting your energy and the like recharge in the meantime.

It does have an interesting microtransaction system, though. Any time you spend money you’re given some rings, and hitting certain ring totals will move you up to the next rank of the game’s VIP system.

The higher your VIP rank, the more daily rewards you get: these include stamina refreshes, more gold and the ability to quickly ‘raid’ battles you’ve already 3-starred so you don’t have to sit through them again when you’re grinding for upgrade items.

I’ve spent about £5 on it in total (I don’t mind giving a little money in free-to-play games I like), and that’s raised my VIP rank to a level where I’m earning a nice enough supply of goodies each time I log in.

Of course, it still tries its best to squeeze more money out of you, and it actually has some of the grossest ‘offer’ pop-ups I’ve seen in a mobile game, especially considering its clear appeal to children (a “special” deal on diamonds for just £84.99? How kind of you!).

Manage to resist these outrageous offers, though, and you’ll find a half-decent game with more than its fair share of fun Disney nods and winks.

Review code for Pool Panic, Miles & Kilo and F1 2018 provided by PRs. Picross S2 was bought myself. Disney Heroes is free-to-play, I spent around £5 on microtransactions.

If you enjoyed this and want to help me write more reviews on a regular basis while continuing to make the site ad-free, please consider donating to my Patreon account.

Don’t want to commit to a regular payment? I’ve now got a PayPal ‘tips’ jar: if you liked this article in particular feel free to chuck yer man Scullion a couple of quid and help stock up my Irn Bru fund so I can continue working away like a bastard.

Alternatively, if you’re a UK reader and can’t afford to support me on Patreon, please do your normal Amazon UK shopping via this link. Tired Old Hack is a participant in the Amazon Services LLC Associates Program, an affiliate advertising program designed to provide a means for me to earn fees by linking to Amazon.co.uk and affiliated sites.

Thanks so much for reading this. If you found it useful, please do share it with your friends. The more people who read it, the more the site can grow and the more I can write.