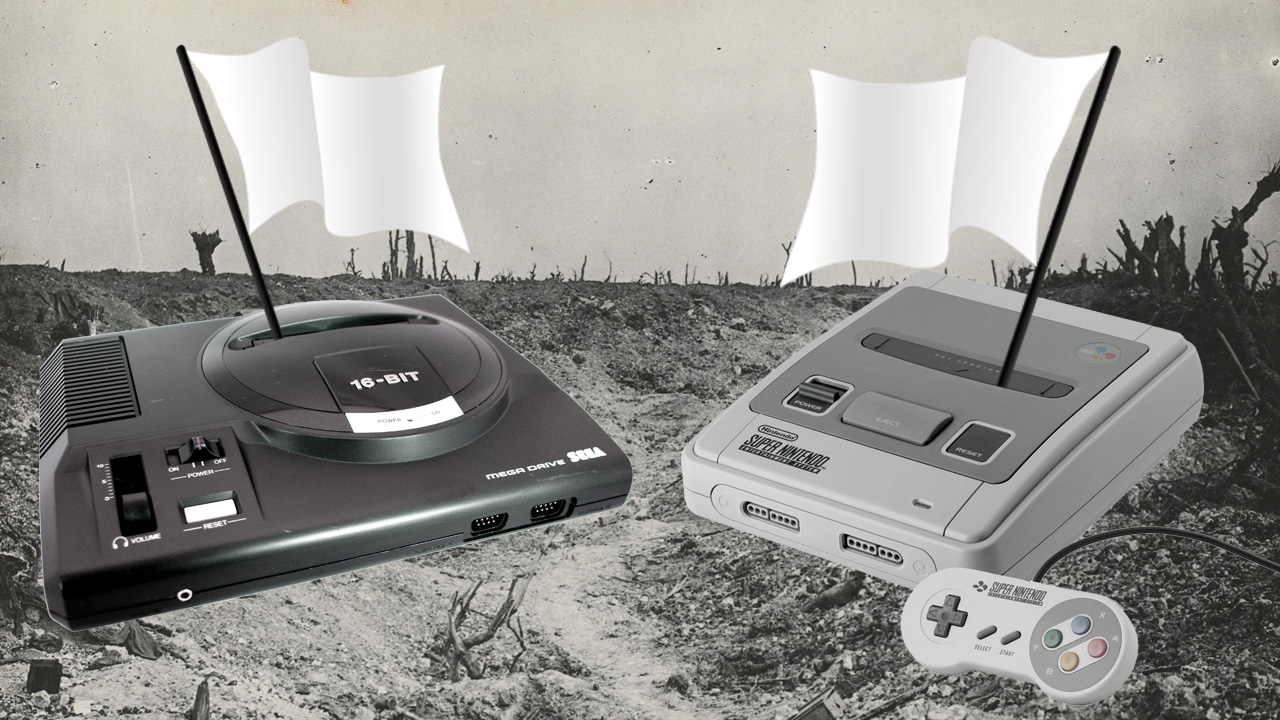 You may have heard the World War I story about how, on Christmas Day in 1914, British and German soldiers stopped their fighting for one day, opting to toss their differences to the side and instead play football and exchange gifts on No Man’s Land.

In my school, we had our own war. It was far more frivolous – lives weren’t lost and we used words, not weapons – but it still mattered to us. And on one special day, we had our own truce too.

As a gamer approaching his mid-30s, I’ve been fortunate to have lived through almost every console generation (I started with the second, which included the Atari 2600 and the like).

My age also means that, at numerous times during my life, I have witnessed first-hand the devastating effects of the Video Game Wars.

The first was the 8-Bit Console War. It was – on the British front, at least – a mere scuffle, as young NES and Master System owners were only starting to discover and develop their respective allegiances to Nintendo and Sega.

By the time these allegiances strengthened, it was already time to move onto the next generation of consoles. And that’s when things got serious.

The UK-only Computer War saw the Amiga, Atari ST and *chuckle* Amstrad battling it out for the right to lead the microcomputer monarchy.

But it was the 16-Bit Console War that would dominate playgrounds and divide friendships up and down the country.

On one side, the Super Nintendo Entertainment System (or SNES, if you want to keep it informal). On the other, the Sega Mega Drive (or Genesis, if you lived in North America).

Every day at school, our lunchtimes were spent on the playground – our battlefield – as young gamers defended their system of choice and attacked that of their rivals.

As the only child in my class fortunate enough to own both a SNES and Mega Drive – my hometown was a bit rough so my parents seemingly decided keeping me indoors was preferred – I was considered the mediator during these daily skirmishes.

I’ll also confess that, as the most clued-up gamer in the class and the one who bought all the Sega and Nintendo magazines, I was usually the one who happily delivered the latest news to the trenches, fully aware it would lead to fresh conflicts.

Then the Mega Drive got its own version, offering everything Turbo did. It was a levelling blow, one which quelled that particular battle.

Other contests were not as easily resolved. The ever-popular strategy of using exclusives as unbeatable arguments cut deep wounds that never healed.

Nintendo fans were able to call on Mario and Zelda, two powerhouses that had served them well in the NES days and continued to be vital weapons in the 16-bit war.

On top of that, a wealth of new franchises like F-Zero, Pilotwings and Starwing / Star Fox allowed for further ruthless attacks.

On the other side of the battle, Sega devotees had a certain blue hedgehog who offered an edgy ‘90s ‘cool dude attitude’ Mario and his allies didn’t have.

With the power of Sonic and some of the Mega Drive’s own exclusives – Streets Of Rage, Michael Jackson’s Moonwalker, ToeJam & Earl and the like – Sega fans were able to give as good as they got, returning some exclusivity artillery of their own.

And there was me in the middle of it all, taking no sides, acting as the adjudicator and fact-checker. If an argument sounded dubious (was Eternal Champions really better than Street Fighter II?) I was the judge who clarified the truth (no, it was not).

As the war rumbled on we were all too heavily and emotionally invested in it to realise the futility of it all. Of course Sega fans would never convince Nintendo fans their console was better, and vice versa.

Experts predicted the war would be over by Christmas, but they were horribly wrong. After all, we all got new games at Christmas so it just got worse.

And so we continued endlessly, with constant attacks from either side. ‘Mode 7’ would come from one end, ‘Blast Processing’ from the other. Yells of “we have Super Star Wars” would be met with cries of “our Jurassic Park game was better”. Deep down we all just wanted some respite.

And then there was Henry.

That wasn’t his real name. I’ve changed it for the purpose of this story. You’ll soon find out why that is, even though his real name should be heralded throughout the ages for temporarily stopping the unstoppable war.

Henry was a bit of a boffin. That’s because his mum was a teacher. Not at our school, but a different one. She was clearly one of those strict teacher mums, because she believed that if Henry had to have an electronic device, it would have to be educational.

That’s why Henry didn’t have a SNES. Or a Mega Drive. Or an Amiga, Atari ST or even an Amstrad. Henry had an Acorn Archimedes.

In the Video Game Wars, Henry was Switzerland.

That’s not to say he didn’t have dreams of taking part, though. Although his mum didn’t let him have game consoles, Henry regularly came to my house to play my SNES and Mega Drive. I let him read my games magazines at school, and he used his brainbox intellect to form his own opinions.

During the daily playground debates, Henry would sit alongside me, watching. He enjoyed watching everyone else getting worked up, but never offered his opinion. Nobody asked, after all: it was assumed he had no knowledge of the subject.

One day, it was raining so we had to spend our lunchtime in the classroom instead of the playground. To pass the time, one of the many fruitless attempts to solve the 16-Bit War was suggested: a poll.

It was decided that every pupil in the class had to decide which was best once and for all: the SNES or the Mega Drive. This included the girls, even though they didn’t care.

(That may sound sexist but it was true: in my era, we had no confirmed female gamers in my class. At lunchtimes they usually sat at the wall and read Smash Hits magazine and listened to Take That, East 17 and M People.)

The poll was not an anonymous one. In clear contravention of the Universal Declaration of Human Rights, pupils had to line up and publicly declare their allegiance: SNES or Mega Drive.

As I stood near the back of the queue, watching as each pupil’s reply was met with over-theatrical cheers and jeers, I realised they would eventually come to me and I’d have to make a decision. For the first time, I was no longer allowed to be the mediator: I’d have to pick sides.

Luckily, they never got as far as me. Because they got to Henry first.

By the time the poll got to Henry, things were neck-and-neck. The girls, who wanted to get it over with, just picked anything. The law of averages meant every legit vote was crucial.

And so, twenty-nine pairs of eyes gazed firmly at Henry, his freckled face nervously ready to give his verdict.

This was it, Henry’s big moment. For months he had been playing games at my house, reading my magazines, soaking up my info. Now it was time for him to make his reasoned decision.

An eruption of noise filled the classroom, as Sega fans hollered many a hearty “YAAAASSSSS” (it was a Scottish phrase long before Twitter stole it).

But Nintendo fans weren’t satisifed. They needed to know more. This wee boffin was badmouthing their beloved SNES and they wanted to know his reasoning behind it.

“The SNES is fun,” Henry replied. “I like Super Mario World and Teenage Mutant Hero Turtles: Turtles In Time is great.

“But nothing will ever match the majesty of Ecco The Dolphin.”

There was a brief silence, the sort of silence you get when a toddler falls over and there’s that anxious pause where you aren’t sure if mayhem is about to ensue.

Let me remind you that Henry was probably 10 years old, 11 at most. Using the word ‘majesty’ in a classroom at that age is about as recommended as having a shite in the litter bin.

Nintendo fans gleefully laughed at him, shouting “MAJESTY YA PRICK” at his face – that would teach him for choosing the Mega Drive.

Sega fans joined in too. He may have taken their side, but there were more important things at stake here then a silly console war. A child had just said ‘majesty’.

For the rest of the day Henry was mercilessly mocked by both sides of the divide. For that day, it didn’t matter whether Nintendo or Sega was better – a nerd had said ‘majesty’ and they had to unite to take the piss.

Over the years we’ve had more wars. The First Polygonal War saw new faction Sony enter the mix and overcome the N64 and Saturn, while Sega was a massive casualty in the Second Polygonal War – its Dreamcast finishing last in a four-horse race with the PS2, GameCube and newcomer Xbox.

And of course, you all know about the Third and ongoing Fourth Polygonal Wars, with Sony and Microsoft trading shots in the trenches while Nintendo happily goes down the conscientious objector route.

But nothing will ever be as serious, as devastating, as divisive as the 16-Bit Console War.

Those who lived it will never forget it. Those too young to remember and think today’s petty arguments over frame rates and 1080p vs 900p frivolity are serious business are met with a stern “you weren’t there, man” by embittered sprite-based veterans.

I was there. I saw friendships end, alliances formed, actual tears of frustration falling on the playground, turning the asphalt eternally salty.

But I was also there on the day Henry, heroic Henry, gave us our own Christmas Day football match on No Man’s Land.

I was there on the day the console war stopped.

If you enjoyed reading this and want to help contribute to my ongoing psychiatric costs to help me get over the 16-bit War, why not consider becoming one of my Patreon peeps?

7 thoughts on “The day the console war stopped”