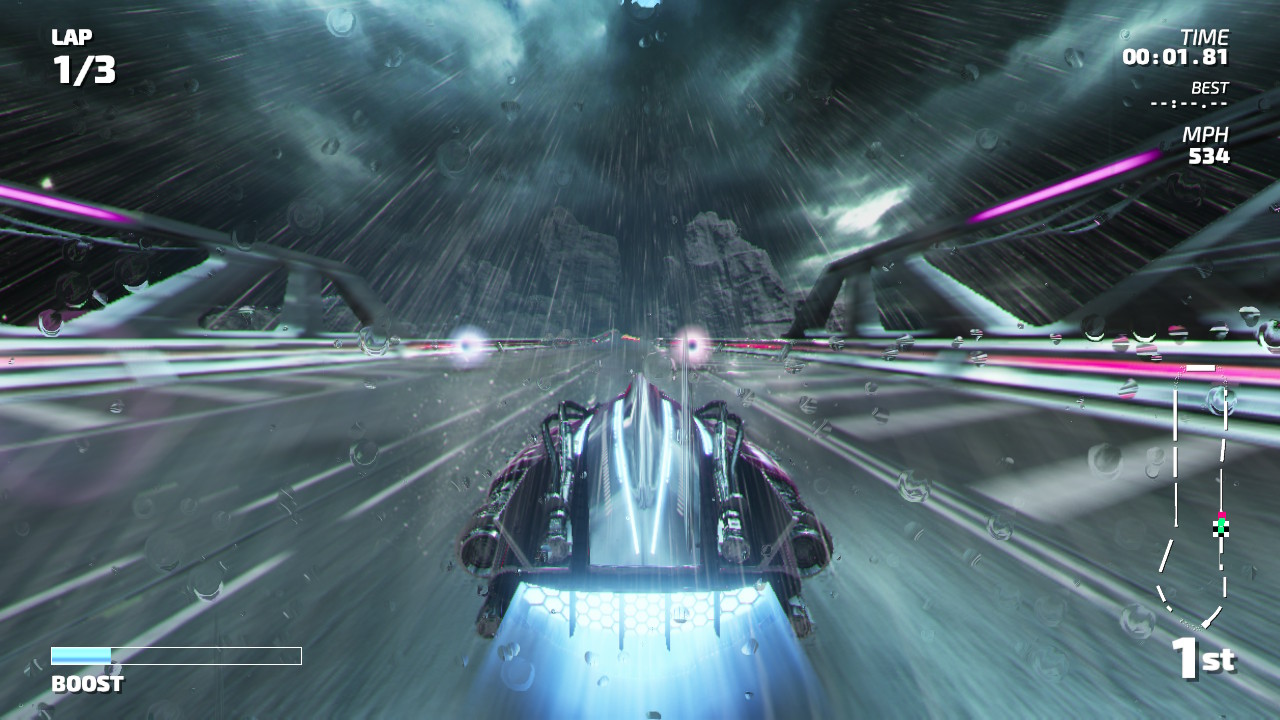 If you want a masterclass in how to push game hardware to its limits, look no further than German developer Shin’en Multimedia.

Since the turn of the millennium Shin’en has been pumping out games that look much better than they should, given the restrictions of the formats they’re on.

Nanostray and its sequel offered visually impressive shoot ’em up action on DS, turning Nintendo’s humble handheld into a powerhouse.

Even more impressive, downloadable WiiWare titles Jett Rocket and FAST Racing League were two of the best-looking games on the Wii, a fact made even more extraordinary by the miniscule 40MB size limit Nintendo reportedly put on WiiWare submissions.

FAST was the most popular of the two, encouraging Shin’en to make a Wii U sequel, FAST Racing Neo. And now here we have the third game in the series, FAST RMX on Switch.

If you aren’t familiar with FAST, think F-Zero crossed with WipEout. Hovering ships, lightning fast racing, more speed than the toilets at a celebrity awards show, that sort of thing.

With no new F-Zero game in sight and Nintendo-loving Captain Falcon fans getting increasingly anxious that the Kyoto bigwigs aren’t in any rush to give them what they want, all eyes have turned to Shin’en to see if it can bring us a similar fix on Switch for now.

Thankfully, for the most part it’s managed to do just that, because FAST RMX is simple, unadulterated arcade racing fun.

Like its predecessors, RMX’s main gimmick is phase shifting. Essentially, you can switch (ahem) your vehicle’s jetstream with the X button, flipping it between orange and blue jets.

Throughout each track are a bunch of orange and blue speed boosts and jumps. No prizes for guessing what that means: you need to have the same colour as you pass over them otherwise they won’t trigger.

This results in a racing game where you have to pay a little more attention than usual, even if you’re out in first place when most racing games tend to get a little dull.

It also leads to some brilliantly satisfying moments, like the courses which have a succession of orange, blue, orange boosts on the track and you have to slalom between them, switching your colour as you go along. Nail them all and you feel like a fucking champ.

As well as the speed boosts liberally scattered across each track your vehicle is equipped with its own turbo boost functionality which can be refilled with orbs on the track. Just in case the game wasn’t fast enough, you see.

While this can be exhilarating, it does get a little too much at times, making it almost impossible to control your craft without fucking it off a barrier.

You can see what I mean in this gameplay footage I took. Sorry the quality’s a little fuzzy but a game this fast totally messes up YouTube’s compression algorithms:

As you can tell by that video (at least, what you could make of it through YouTube’s mushy pixels), the game looks absolutely stunning.

Running at a smooth 60 frames per second with frame drops a rare occurrence, it’s easily the best-looking game at launch, at least technically (it’s fair to say Breath Of The Wild still has the most beautiful art design).

Add to this the fact that the whole game – with a hefty 30 tracks and 15 vehicles – only clocks in at around 800MB, and FAST RMX is yet another example of Shin’en’s complete mastery of hardware optimisation.

“What of the game modes, Chris?” I hear you ask. Okay, you didn’t, but I’m going to pretend you did so I can talk about them.

Well, I’m glad you definitely asked. Naturally, you’ve got your standard Championship mode, which is a Mario Kart style Grand Prix affair consisting of 10 cups with three races in each. These come in three difficulties, each affecting the top speed. The usual fare.

Then there’s multiplayer, which comes in three flavours: split-screen for 2-4 players (might want to play on TV mode if you’re playing with three or four, otherwise the screen gets too small), local wireless or online.

The online was a bit janky in the races I tried: the action was perfectly smooth for me but my opponents were lagging all over the place and after finishing in 1st place I was politely informed I’d actually finished 3rd.

Local multiplayer is a treat though, even in split-screen: amazingly, it still manages to run silky smooth with four players taking part.

Finally, you’ve got Hero mode, which is a tribute to F-Zero. In this, your turbo boost also doubles as your health bar, meaning every time you boost to get an advantage you risk overdoing it, hitting something and ending your race. Running over speed boosts on the ground fills your bar though, so it’s all good in the hood.

Shin’en has promised the game will be getting free updates, starting with a Time Attack mode and support for racing people on your Friends list, which is coming soon.

FAST RMX is the game to load up when you want to show off the Switch to someone and you’re looking for a more immediate “oomph” than Zelda gives.

As the most technically impressive game in the Switch launch line-up, its brilliantly detailed tracks, plethora of visual effects and beautifully smooth frame rate make the Switch really feel like a beast, especially in handheld mode: nothing on any other handheld or mobile device comes close to touching it.

Conveniently, as well as a graphically remarkable game it’s also a fun one, evoking the good old days of arcade racers when all that mattered was going fast as fuck and trying to finish first. Controlling it can get a little tricky at times, but in a way is that not a metaphor for life?

Look, just go with it. I’ve been reviewing Switch games like a bastard this week and my brain’s sore so I didn’t know how to end this one.

It’s good, is what I’m saying.

This review was not based on a review code, I purchased it myself with funds provided by my lovely Patreon followers. If you enjoyed this review and want to help me write them more frequently, please consider donating to my Patreon account.