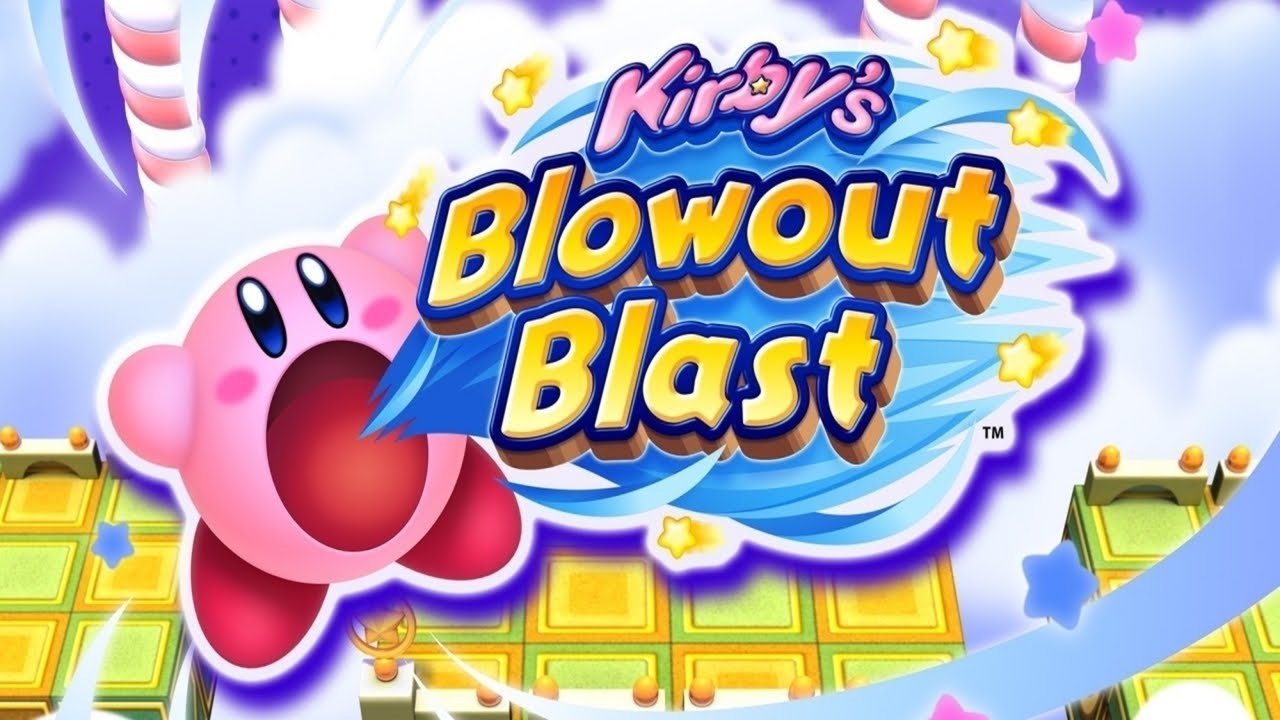 It’s time for another group of mini-reviews in which I cover the games I’ve been playing over the last couple of weeks. This time:

• Is Kirby’s Blowout Blast a birthday bash or a no-show?
• Is Flip Wars a Bomberman rival or a load of flipping pish?
• Is Death Squared a block-rocking feat or a cubic whinger?
• Is Dark Witch Music Episode: Rudymical a toe-tapper or a missed beat?

It’s Kirby’s 25th anniversary, so to celebrate Nintendo and HAL Laboratory have put together a bunch of treats for fans of the testicular inhaler.

One such offering is Kirby’s Blowout Blast, a ‘new’ eShop game for the 3DS (actually an expanded version of the 3D Rumble mini-game in Kirby: Planet Robobot) which attempts to mix things up a wee bit by adding a third dimension to the usual Kirby gameplay.

What we have here is a series of short 3D stages (think Super Mario 3D Land but with Mario replaced with a large scrotum) which do away with all the ability-stealing shenanigans and revert Kirby right back to the early days, when all he could do was suck up enemies, spit them out and fly.

The ‘task’ is to simply reach the end of each stage, but such is the game’s low difficulty (classic Kirby) that for most semi-experienced gamers the actual goal to aim for will be getting gold medals on each level, since this unlocks a series of harder stages.

It’s this which makes the game entertaining, as you have to work out the best way to navigate the level in order to trigger the necessary conditions to get a gold.

Most important here is figuring out which enemies to swallow. Kirby can eat a number of enemies at once if they’re caught in his initial gulp, and if you swallow more than one the resulting shot he fires out can take out multiple baddies.

To get the best score, then, you’ll need to learn where the biggest waves of enemies appear and use a super shot to take them all out with one vomit.

Blowout Blast is not a long game: I managed to get gold medals on every stage and EX stage in just a few hours. Thankfully its relatively low price of £6.29 reflects this.

Whether it’s worth getting, then, depends on what you consider game completion is. It kept me entertained for a few hours during a flight but if you only play through a game to see the end credits then it’s going to be sorely disappointing. You’ll only get the most out of it if you try to get 100% completion.

Japanese indie dev Over Fence previously made a handful of mobile games, but it would appear Nintendo saw something in the small studio that made it want to help out with publishing duties on its first Switch game, Flip Wars. I’ve got to say, I don’t see it.

It’s a multiplayer game for 2-4 players in which you have to cover a grid with as much of your own colour as possible. You do this by performing jumping ground pound attacks, which in turn flip over a bunch of panels in a cross shape from where you land.

The rest of the basic mechanics are as you’d expect: you can sabotage opponents by flipping over panels they’ve already coloured, and if an opponent is standing on a panel when it flips they get killed and have to go back to their starting point.

There are a couple of power-ups in there to vary things a little, but for the most part that’s pretty much all there is to it.

Don’t get me wrong: what’s there is okay, but for £9.99 I’d expect a hell of a lot more. Local multiplayer is only fun for a little while before it becomes clear there’s a bit of a random element to it.

I’ve had plenty of matches in which I’ve been goat shit for almost the entirety of the time limit, but in the last 10 seconds did a couple of flips in the middle of stage and undid everyone else’s hard work, then won as a result.

Cue the rage from other players you’d expect in any good multiplayer game, but without any satisfaction for the winner: just an empty feeling that you’ve won by screwing the system rather than showing any skill.

Sadly, there isn’t really much more to the game. The only offline gameplay on offer is one-off matches with up to four players (or a trio of AI bots if you’re all lonely and such).

The online multiplayer, meanwhile, is so temperamental that actually getting through a match without some sort of disconnection issue is an accomplishment in itself.

Meanwhile, other modes – local network play, ranking mode, even the trophy system – are all locked off with ‘coming soon’ messages, which is nothing short of bullshit in a game being sold as a finished product and not some sort of Early Access situation.

This happened in NBA Playgrounds too: the Switch version’s online multiplayer was greyed out and was only just added a couple of days ago, more than two months after release. This had better not be a new trend.

Flip Wars didn’t do it for me. If you want entertaining multiplayer gameplay on your Switch there are already a bunch of better games out there. If it’s something of this ilk you want, just drop the extra pounds on Super Bomberman R: continuing the theme, it’s also had a slew of updates since launch, but it’s a far, far better game for it.

When it comes to co-op gaming the Switch already has a bunch of gems: Snipperclips, Lego City Undercover, Shovel Knight, Minecraft and the like. Death Squared is very much a game to be added to this prestigious list.

It’s a game for 2 or 4 players (although you can play it solo if you like), in which you have to guide coloured robots through a series of single-screen puzzles and have both of them touch a goal switch at the same time.

These robots are test subjects in an AI experiment, and have been placed there to see if they can figure out how to solve each puzzle.

As such, each stage is littered with a bunch of sneaky traps designed to make you die instantly and deliberately irritate the fuck out of you.

By moving one robot, you could unwittingly be triggering a set of spikes or a moving block that boots the other robot’s arse. If one dies, you have to start the level again from scratch.

As the robots, then (or rather their AI), you have to adapt and respond to these traps and be sure to remember and avoid them next time.

All while this is going on there’s a narrative in which a (fairly annoyingly voiced) scientist and his HAL-type computer are discussing what the robots are up to.

There’s a real ‘one more level’ feel to Death Squared, and as a co-op game it’s pure cocaine. It’s one of the only games (other than Snipperclips) that my wife willingly played with me and had fun doing so.

This is partly because the controls are so simple, making it ideal for partners and other non-gamers. The Control Stick is the only thing you need to play the entire game, meaning the inevitable “what are the buttons” question is easily answered with “there aren’t any, mate: get stuck in”.

The puzzles also have a nice difficulty curve, starting from ‘relatively simple’ and steadily making their way up to ‘I’m terrified to move my robot a millimetre in case my fucking face melts off’.

It’s just a great little puzzler, and one with a lot to do in it. Making your way through the 80 two-robot puzzles and the 40 four-robot ones will take you long enough, but the super difficult ‘vault’ puzzles you unlock after this will keep you going for even longer.

The only real negative is the aforementioned annoying voice acting, but thankfully this can be turned off. That aside, then, fans of puzzlers (especially co-op ones) should consider this a must-have.

In 2014, Japanese studios Inside System and Flyhigh Works released The Legend Of Dark Witch, a fun 2D action platformer for the 3DS, Vita and Steam. A year later it got a sequel, which offered more of the same as well as a rhythm action mini-game.

Dark Witch Music Episode: Rudymical is, in essence, a beefed-up version of that rhythm mini-game, presented as a standalone offering.

Rather than running and jumping, then, this time you’re rooted to the spot as you take on a series of characters in music-based battles.

Both you and your opponent have health bars, and it’s up to you to either destroy or avoid the projectiles thrown at you by pressing the right buttons at the right time.

Every time you hit a projectile you do damage to your foe, and obviously any time you get hit you lose health yourself. All fairly straightforward stuff.

As a huge rhythm action fan I was well up for Rudymical but it sadly leaves quite a bit to be desired. It certainly looks lovely but that’s the only major plus in my eyes.

The music – a fairly important element of a rhythm action game – isn’t really catchy, and despite playing each track a number of times I still couldn’t hum any of its tunes to you even if you put a rifle to my face and threatened to decorate my living room walls with brain bits.

It’s also – depending on the difficulty level you choose – either too boring or too difficult. Play on the lowest settings and the need to only press one or two buttons to the beat makes things far too dull.

Ramp it up to the maximum setting and the constant stream of projectiles would be tricky enough without the fact that they also don’t always make logical sense in terms of the beat. A rhythm action game that doesn’t follow the rhythm isn’t great.

If you must have a rhythm game on the Switch, get VOEZ instead. It’s a bit pricier but it’s significantly better in all ways: music quality, the number and quality of tracks, visual splendour and general satisfaction. This one, on the other hand, is a bum note.

In order that I could write the above reviews, I received copies of each game from their respective PRs. The content of my review and the opinions therein were in no way positively influenced by this.

If you enjoyed these reviews and want to help me write them more frequently, please consider donating to my Patreon account. Alternatively, if you’re a UK reader and can’t afford to support me on Patreon, please do your normal Amazon UK shopping via this link: it won’t cost you any extra, and Amazon will pay me a percentage because I sent you there.