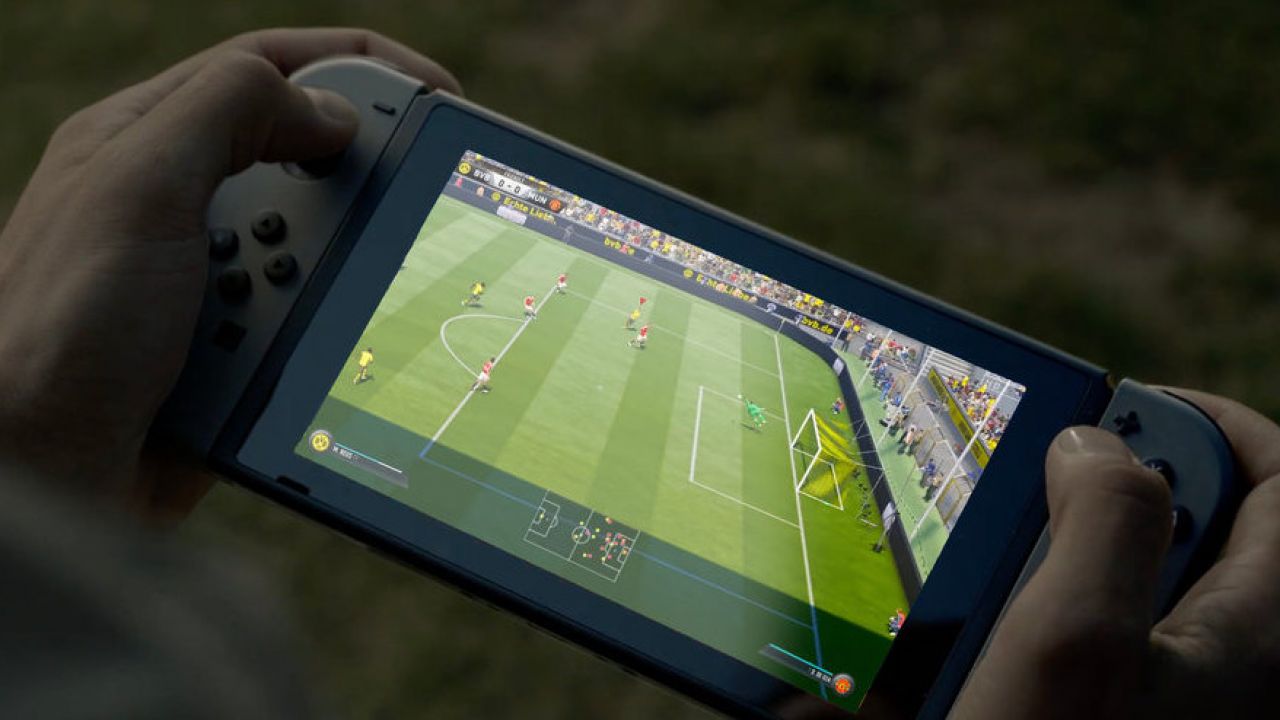 Note: Because of restrictions placed by EA, I wasn’t allowed to capture any gameplay footage or screenshots of FIFA 18 on Switch while I was playing it.

I also wasn’t provided with any screenshots, and I don’t agree with showing Xbox One and PS4 screens in their place, because they aren’t an accurate representation of how the Switch version looks.

To make up for this, instead of screenshots of FIFA 18 on Switch, I’ve included my favourite Celtic goals against Rangers.

Quick disclaimer: I’m an enormous FIFA fan. I saved my pocket money for months to buy the first FIFA International Soccer on the Mega Drive on the day it launched in December 1993, and although PES took over my attention in the early 2000s (because of course it did) it still didn’t stop me buying every FIFA game over the years.

I’m not ashamed then to say that, after Super Mario Odyssey, FIFA 18 is the game I was most looking forward to try out when I visited Nintendo’s UK HQ earlier this week.

EA is infamous for fucking over Nintendo fans in recent times when it’s come to its sports games. FIFA 13 on Wii U was just an enhanced FIFA 12 with all the good modes taken out: this led to understandably poor sales which EA then pointed to as a reason never to make another Wii U FIFA.

I held my breath as I selected the FIFA 18 icon on the Switch I was using. “Please don’t bottle this one,” I thought. After just a minute into my first match, I exhaled. It’s legit.

Let’s not beat around the bush: the Switch version of FIFA 18 will not be as good as the Xbox One and PS4 versions. It won’t look as impressive – especially given the Xbox One X and PS4 Pro will likely output it at 4K – and it won’t use the Frostbite engine for ridiculously detailed character models and arena lighting.

However, to my eyes it also looks slightly better than the Xbox 360 and PS3 versions of FIFA. Do bear in mind, though, that this is just based on my first instinctive impressions while playing a couple of matches: until we get to do a proper side-by-side comparison the jury’s still out on that. It certainly seems to look better though.

More importantly, EA has finally learned from its Wii U balls-up and has actually included most of the modes from the other versions of the game.

The proper Career mode from the other console versions is fully present and accounted for, online play is there, and even women’s football makes the ‘switch’ too (fuck the haters, I like playing the occasional Women’s International Cup as Canada every now and then as a nod to the missus).

Best of all, though, the legendary Ultimate Team mode is included, meaning it makes its Nintendo debut for the first time ever.

For those not in the know, Ultimate Team is cocaine for FIFA fans: starting with a team of 50-odd rated shitmunchers from the lower leagues of the world, you earn coins by playing matches and entering online and offline leagues.

These coins can then be spent either on packs of players and items, helping you improve your team, or in the game’s transfer market where you can buy the specific players you want for higher prices.

If you’re thinking this sounds like microtransaction city, you’re completely right. But, crucially, it isn’t necessary. I’ve never in my life spent a penny on FIFA beyond buying the main game every year and yet my FIFA 17 Ultimate Team squad contains the likes of Mesut Özil, Iniesta and a bunch of legends including Davor Suker, Filippo Inzaghi and the glorious Henrik Larsson.

What remains to be seen is whether your Ultimate Team can be accessed across different versions of the game, or whether they’re format-specific. The dream for me is getting FIFA 18 on both Xbox One and Switch, so I can play in full 4K glory on my Xbox One X at home, then continue messing around with my team on the Switch when I’m on the move.

If, however, it turns out I’m going to be stuck with two different teams – one on Xbox and one on Switch – that might give me less enthusiasm to use the mode on Switch.

Of course, this won’t be an issue for anyone who plans to buy it on Switch alone, but for people like me who’ll be using the Switch version more as a handheld accompaniment to the Xbox One / PS4 console version, it could be a pain. After all, the journey to a great Ultimate Team is hard enough when you’re doing it once a year.

Speaking of journeys (how’s that for a fucking link), the much-hyped Journey mode will not be present in the Switch version of FIFA 18. This is the story mode in which players take control of Alex Hunter, a young prospect who starts as a youth player and works his way up to Premier League glory. Well, he won’t be doing it on Switch.

Part of me wonders if this omission is due to EA backing itself into a corner last year. When The Journey debuted in FIFA 17, EA was all full of bravado and declaring that it was “only possible with the Frostbite engine”. Because, as we all know, cutscenes in video games didn’t exist before 2016.

Cynics (like me) suggested that The Journey was very much possible on Xbox 360 and PS3, and EA was just putting it on the Xbox One and PS4 versions because those were the ones it wanted to promote and spend most of its finite development resources on. Which would be a completely acceptable reason, in my eyes.

However, it now leads to an awkward situation a year later when we now have the Switch, a system that isn’t on the way out like the 360 and PS3 are, and which is also more than capable of handling a story mode with a couple of in-game cutscenes scattered throughout it.

But since it also doesn’t have Frostbite support, and since EA has already spent a year trying to convince us that the mode we’ve seen the NBA 2K series doing for many years is only possible on its new-gen engine, we’re now in a situation where it can’t be on the Switch. I mean, it can, but won’t. So that’s a pain in the sack.

Still, that’s a single mode that takes about 7 or 8 hours to complete, and once it’s done it’s unlikely you’d go back to it anyway. I’d imagine most FIFA 17 players (myself included) played through The Journey once, saw the credits then ditched it entirely and moved onto either Career mode or Ultimate Team: both of which are on Switch and will take up far more of your time.

“This is all well and good, my man Scullion,” you declare, sitting back in your grandiose armchair and taking a thoughtful puff of your pipe, “but all this mode malarkey is for naught if the game itself plays like a cascade of wank.”

A valid point, and one I wanted to address last. All the stuff I’ve already told you is conclusions you can logically come to already by visiting EA’s site and reading its bullet points. We’ve been here before on the Wii U and we were fucked over.

This time, I’m genuinely hopeful that things will be different, and the thing that gives me that hope is my experience actually playing the thing. Make no bones about it, this is proper FIFA.

Yes, its lack of Frostbite engine support means it’s maybe missing a few physics-based mechanics. But the Impact engine (which I’m assuming this uses a modified version of) was no slouch either, and I managed to have a couple of highly enjoyable matches on the Switch without ever thinking “ah, it’s a shame I can’t do this” or “I wish that was in there”.

This isn’t just the Xbox 360 version of FIFA 17, this is very much a new FIFA game. There are already elements in there, like the new one-man kick-offs (introduced for the new rule which says kick-offs can now be passed back), which prove this.

This is real FIFA, one that’s only compromised slightly by appearing on a system with less power, but is still unashamedly legit. I was still able to knock the ball forwards with Ronaldo, skip past a defender on the wing, hit a controlled R2 shot (sorry, ZR) into the top corner, then perform the Klinsmann dive celebration I always do when I score. It may be a slight downgrade, but the heart is pure modern FIFA.

Crucially, this means it’s also the best handheld FIFA by a country mile. I’ve been playing the Vita versions for a few years but each has just been a ‘legacy’ version of FIFA 11, so that means handheld FIFA fans will suddenly be leaping forward more than half a decade.

Now, with a handheld that offers a full set of four shoulder buttons and more graphical power than an Xbox 360 or PS3, we’re finally looking at a portable FIFA game that looks, plays and – most importantly – FEELS like it does on home consoles.

I played this demo at Nintendo’s UK HQ in early July. This trip was made possible by my Patron backers, whose pledges helped pay for travel and accommodation. If you’d like to support my further work, please consider donating to my Patreon account.