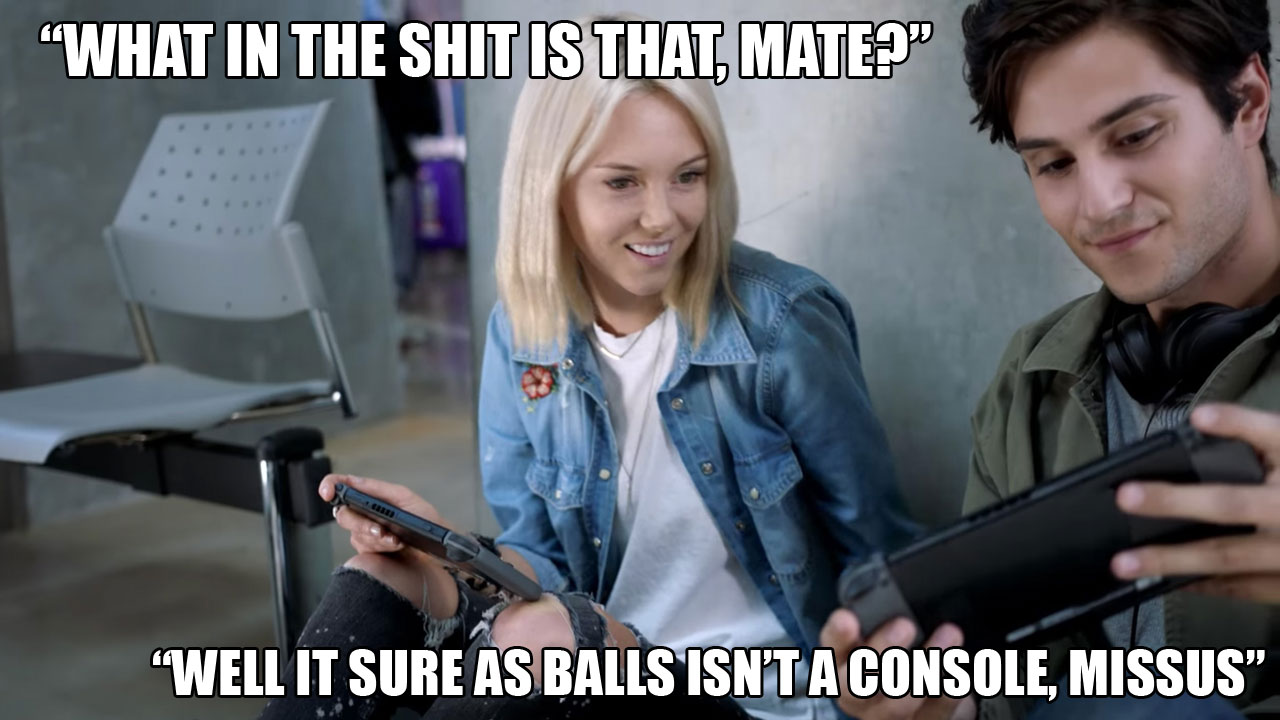 Ever since the late 1980s, when the Game Boy started its global dominance, there has been an overwhelming agreement on the difference between home consoles and handhelds.

A home console is one that, as the name suggests, can be played at home: you plug it into your television, sit back and enjoy all the platform-jumping, goal-scoring, enemy-fragging shindiggery you want from the comfort of your sofa.

A handheld, meanwhile, is a console you can take on the move with you. It has its own screen and, crucially, never needs a TV. You can take it wherever you like and play games on it no matter where you are in the world.

That’s why I’m really bewildered at the way many online are comparing the Switch to other consoles (including the Wii U). Although Nintendo – for some bizarre reason I still can’t comprehend – is adamant that the Switch is a home console, that’s frankly bullshit. It’s a handheld, and anyone saying otherwise is… well, ‘wrong’ sounds harsh. Not right, basically.

Just because you can play it on your TV, that doesn’t make it a home console. Since it meets that crucial handheld criterion – it can be played fully anywhere and never needs a television at any point in its entire life – it’s quite blatantly a handheld.

That’s why the handheld bit is called the Switch, and the thing you plug it into so you can play it on the telly is merely called the Switch Dock. Sort of like how you can plug an iPod into an iPod Dock when you’re at home: that doesn’t make it a bloody hi-fi.

It’s clear to see where the ‘handheld vs console’ confusion has come from, though – Nintendo itself. It seems the company’s desperate to get the following message across in no uncertain terms:

• The Wii U is dead
• The Switch is its replacement
• The 3DS is still alive: keep buying it pls thx

On paper it’s a sensible stance to take: the Wii U has been flatlining longer than Rolf Harris’s art career and the 3DS is still making money. Have a look at Pokemon Sun and Moon, the fastest selling games in the series’ history.

Why would Nintendo want you to think it’s replacing its popular handheld with a new one? Even though it’s selling A NEW HANDHELD.

No, the spin being dished out is that going forward (at least this year) it’s going to be Switch and 3DS, home console and handheld. A partnership as perfect as peanut butter and jelly, salt and vinegar, or Joey Barton and literally nobody.

That’s on paper, though. In practice, Nintendo’s decision to market the Switch as a home console is – much as I love Nintendo – fucking bewildering.

I left the UK Switch event last Friday massively excited about this beast of a handheld. It blew my mind that something so small could produce visuals on a par with (and sometimes even better than) the Wii U, and that in just a couple of months I’d be playing the likes of Zelda and a console-perfect Mario Kart 8 on the bus.

When I left the event I enthusiastically went online to see the response. What I mostly saw was people complaining it was less powerful than the Xbox One and PS4.

“Of course it is,” I thought. “It’s a handheld. Look at the size of the thing, and look at the size of Sony and Microsoft’s consoles. How could you possibly expect anything similar?” Because by selling it as a console Nintendo is inviting comparisons, that’s why.

It’s bizarre. If you owned the world’s greatest rally car, you wouldn’t enter it in a Formula 1 race, because you’d get pumped harder than [removed for legal reasons].

No, you’d enter it in rally races, which require a different skill set, and completely dominate in that field. You may not win all the F1 fans over, but maybe some of them like watching rally racing too. Regardless, you’ll certainly earn more money coming in first place all the time rather than being the third place racer nobody remembers.

What I’m trying to say with this piss-poor metaphor is that by deliberately pretending the Switch is a home console, Nintendo is willingly placing it in a competition (whether it says it is or not) against two systems that outpower it and have a massive headstart over it.

Compared to the Xbox One and PS4, the Switch will always be third place in terms of power and – if Nintendo keep up this nonsense – in sales too.

Hell, even Wii U owners looking at this as Nintendo’s next console may not be convinced it’s enough to shell out £279.99 for. “A system that’s only slightly more powerful than the one I already have and plays the Zelda and Mario Kart games I can already get on it? Shove it in your shitepipe, Nintendo.”

The infuriating thing is that this is entirely down to perception. Pretend the Switch is a console – which Nintendo is happily doing with a message the internet is accepting (especially those looking to criticise Nintendo) – and it looks underpowered.

Treat it as a handheld though – you know, the thing it actually bastarding is – and it’s a completely different situation.

I got 99 problems but the Switch ain’t one

The Switch is far and away the most powerful handheld system I’ve ever played. Mario Kart and Splatoon run at an eye-massagingly smooth 60 frames per second, and having a new open-world Zelda game of that quality on the move is something that almost still seems impossible.

3DS? Demolishes it. Vita? Bulldozes it. iPad and Android? Yes, even compared to the most graphically impressive games on those devices, the Switch is a clear winner, with enough space between them to park the entire Mario Kart 8 Deluxe character roster.

If I were in charge of Nintendo, the message to me would be a no-brainer. “The Nintendo Switch is the most powerful handheld gaming system in the world. And when you get home, you can continue to play it on your TV.”

Instead the message is: “The Nintendo Switch is the third most powerful home console in the world. And you can take it with you when you leave the house.”

You only need to listen to the second episode of the Tired Old Hack podcast for evidence of how changing this message can help sales. My guest Kate Gray starts the podcast relatively indifferent to the Switch, and after I start discussing its benefits as a handheld she literally says it’s the first time she’s felt excited about it. It can be as simple as that.

For me, Nintendo should stop focusing on the 3DS. I’m not saying it should kill it off, but the DS and GBA continued to do well after their successors launched, especially as they got price drops and parents bought them for their younger children.

Someone at my work today even told me (no word of a lie) that he impulse bought a 3DS yesterday because the Switch stuff reminded him he still had to play the Ocarina Of Time and Majora’s Mask remakes on it.

There can still be a life for the 3DS if the Switch is marketed as a handheld. I really wish Nintendo would change its message and make it clear that we’re not dealing with another gimmick here – “hey guys, it’s a console you can take on the move!” – but a serious, premium, obscenely powerful piece of kit.

There’s absolutely no shame in admitting: “Listen, odd quirks like the Wii aside, we tend to do better with our handhelds than our home consoles.

“So we’re focusing on that side of the business going forward. Here’s an incredible new handheld, and you can plug it into your TV so those of our fans who prefer console gaming won’t miss out.”

I appreciate how this makes me sound. The number of times I’ve been called “Nintendo Defence Force” on Twitter this week has been infuriating (incidentally, if someone says that to you, tell them to fuck off: you’re allowed to be excited about video games).

I know I sound like a lawyer in a courtroom, nudging his defendant after he’s given a dodgy answer and saying “um, what I think my client is trying to say is…”

This is something we should all be concerned about, though. The success of every company – Nintendo, Microsoft, Sony and everyone else – is imperative if we want to continue to breed competition and ultimately end up with more fantastic games for everyone. But sometimes these competitions are unbalanced.

The Switch is a powerful handheld which is being marketed as an average home console. Nintendo has two battles to choose from here, and so far it’s picking the wrong one.

Let’s hope it ‘switches’ the message soon and starts to better emphasise the quality of what it’s actually offering here.

I know what you’re thinking. “I like the cut of this guy’s jib. I don’t even know what a jib is but he cuts it like a fucking champ. I want to give him money to ensure he can continue cutting jibs with gusto, and maybe one day he’ll fill me in on what jib-cutting entails.”

If that sounds like you, please consider backing me on Patreon. Not sure you trust me? Then try this on for size: a jib is a triangular sail on the front of a boat. I gave you that shit for free, I’m basically the modern Che Guevara.