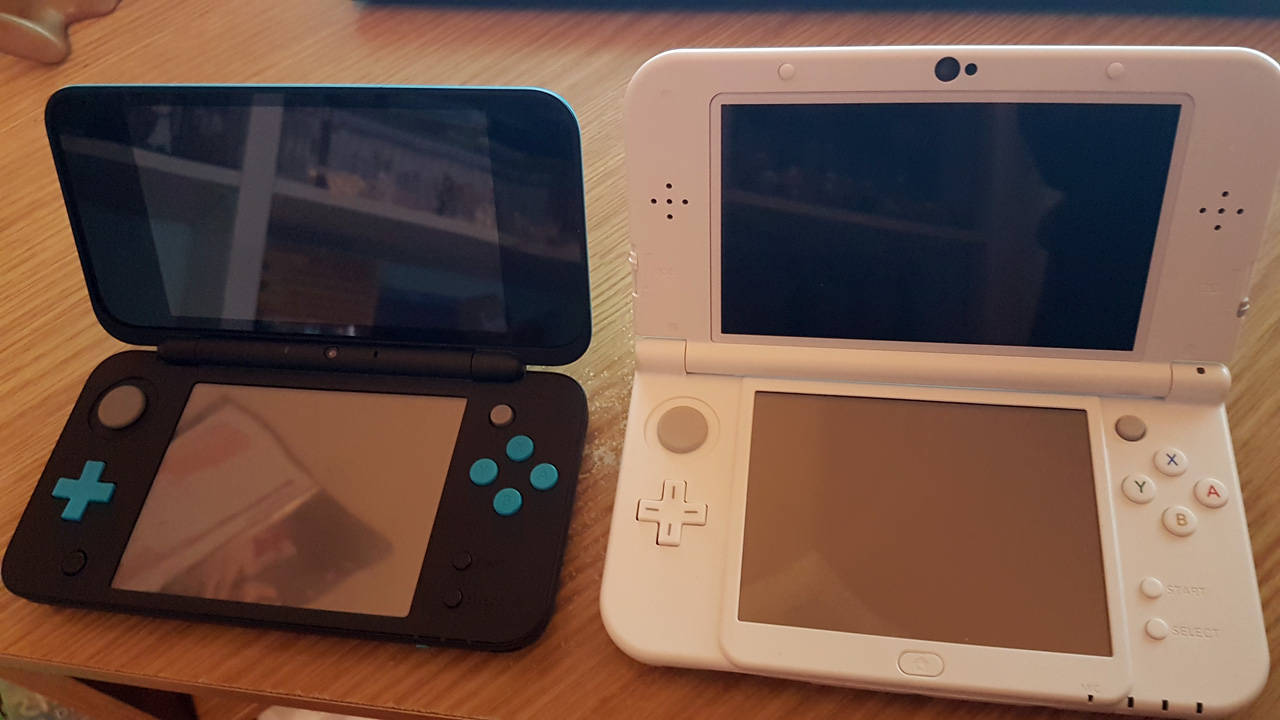 Oh, hello there, Completely Fictional Person Created For The Purpose Of Livening Up A Review Of A Minor Hardware Iteration! I haven’t seen you since the days of the PS2 Slim.

What’s that you have there?

This? Oh, glad you asked. This is the New 2DS XL. It’s the latest in Nintendo’s 3DS family.

Another one? Haven’t they made something like four different models already?

Fuck sake. Now I understand why you needed to create me.

Yup. I even did an unboxing video and everything, and got my slightly tipsy wife to help so I could make it more entertaining.

So it’s a waste of time then?

Actually, to be honest with you, I really like it.

You don’t say. So what’s so special about this one?

Well, let me start with a recap on how we got to this point. It started back in 2011 when Nintendo launched the first 3DS, complete with its shiny new glasses-free 3D technology.

Despite being complete sorcery and genuinely impressive for a while, a lot of 3DS owners eventually turned off the 3D effect.

A little over a year later, Nintendo released the 3DS XL, which was more or less the same as the 3DS except it had much bigger screens. As a result of this the 3D effect looked even better, but people continued to turn it off.

You said the 3D was genuinely impressive though: why did people ditch it?

A few reasons. For starters, playing in 2D instead of 3D saves on battery and, in some games, increases performance. Some games play at 30 frames per second in 3D and move to 60fps when you switch to 2D.

Other players were up for the 3D in practice but didn’t like that they had to hold the 3DS in a ‘sweet spot’, looking directly at it, in order for the 3D to work.

So that’s what Nintendo took on board when it released the New 3DS and New 3DS XL.

The New 3DS and its XL version added a bunch of new features, including amiibo support, more shoulder buttons, a second little analogue nub thing and improved RAM, which allows for a faster operating system.

A handful of games, including Xenoblade Chronicles 3D, only work on the New 3DS because they need to make use of that extra RAM.

As well as this, the New 3DS and XL offered better 3D quality by adding a little sensor which tracked your face as you played and adjusted the 3D accordingly, meaning you no longer had to stay in that one ‘sweet spot’ while playing.

Ah, so that would have fixed the problem then.

It did, but people continued to turn the 3D off anyway. Simply put, it was a gimmick most people just didn’t give a snifter of a fuck about.

Couldn’t they have just made a cheaper version without the 3D?

They did. The 2DS was a budget system with no 3D effect. In theory it was a good idea but it was far from perfect.

As well as the lack of 3D, it also lacked a hinge, meaning it couldn’t close over clamshell-style. And since it was released a couple of years before the New 3DS and New 3DS XL, it was missing all their new features too.

So this New 2DS XL thingy…

…offers everything the New 3DS XL does, minus the 3D effect. It’s basically the Goldilocks of the family: it isn’t too much, it isn’t too little, it’s just right.

How does it look? Even though in this fictional situation I’m standing next to you and staring directly at it.

It’s interesting. For the most part it’s similar to the New 3DS XL, but there are some changes. Its dimensions are a little smaller, mainly because the bezels (the borders running around it) have been drastically reduced.

Wasn’t that where the front-facing camera and Home buttons were though?

It was, but they’ve been moved now. The camera is now in the hinge in the middle of the system, and the Home button has been shifted over to the big blank space in the bottom left.

Here’s a comparison photo to show you what I mean: see how the top and bottom edges are much smaller now as a result.

So it’s a bit slimmer. Anything else?

It’s more comfortable in general then?

Yup, I’d say so. The new design has a nifty wee ridged surface on the top, and the round hinge in the middle keeps everything relatively secure.

The top screen can wobble back and forth a wee bit as you play: this happens on all other 3DS models but it’s a tiny bit more noticeable in this one because the hinge has less support.

How’s everything else? The display and all that?

The displays are are fine, though after going from the Switch’s lovely 1280 x 720 screen back down to its predecessor’s 400 x 240 there’s some adjustment to be had there.

That’s more a personal thing, though. When you sit the New 2DS XL and New 3DS XL side-by-side their screens are pretty much identical.

Granted, I’m sure some tech-head will do a teardown when it comes out and find out whether it’s got a TN or IPS display, but I don’t care.

It really doesn’t matter. Basically, some 3DS systems have a TN display – which means colours get washed out when you view the screen from an extreme angle – whereas others have an IPS display which doesn’t do this.

It’s a pointless discussion: since a 3DS is designed to be played directly face-on and not from the side, anyone who takes it seriously and has a mock freak-out if they end up with a TN display is just moaning for the sake of it.

All you need to know is that the New 2DS XL screen is similar to the New 3DS XL screen: it’s crisp and colourful enough, and its reflective surface means it’s hard to see in harsh sunlight. The usual. I’ve had no real issues with it.

So… um. I’m trying to think of new things to talk about.

I know. You can see why you’re here to liven things up a bit, eh?

Yup. How about… the buttons? How do they feel?

Same as the New 3DS XL. The D-Pad and buttons are nice and clicky, the Circle Pad works well enough and that weird extra rubber nub button still feels rubbish.

Ooh, that’s different, actually. Because it’s a slightly smaller system the stylus has suffered as a result. It’s significantly smaller than the New 3DS XL one, which is a bit of a shame.

I’ll tell you what I hate about my New 3DS. I love playing Animal Crossing and I want to start a blog but each time I want to upload a load of my screen captures I have to unscrew the back of the console and remove the Micro SD card.

That isn’t the case here. There’s now a flap on the bottom of the New 2DS XL that contains both your game cartridge (to stop it being pushed by accident) and your Micro SD card, making it really easy to remove and replace a card now without having to find a screwdriver.

Wow, it’s a good job I told you about that really specific scenario.

Sorry, I just need to check my phone.

No worries, let me quickly look at my Twitter.

Okay, done. Sorry about that. I’ll be honest, you aren’t really blowing me away here.

I get that, but that’s because the New 2DS XL isn’t really designed to. This isn’t supposed to be the new top-of-the-line, flagship model: it’s just another iteration aimed at folk who don’t have a 3DS yet.

This is made clear by the fact it comes with an AC charger. The previous 3DS XL and New 3DS systems didn’t come with a charger, because Nintendo was of the opinion that many customers buying it would be upgrading from a standard 3DS and would therefore already have a charger: anyone who was coming into it fresh could just buy one separately.

The fact that this one comes with a charger included makes it clear that Nintendo believes anyone who already has a 3DS and is happy with it probably won’t bother to upgrade here. This is very much a system aimed at new owners looking to catch up with the 3DS’s huge library of great games.

So what you’re saying is that if I already have a 3DS I shouldn’t bother with this?

Certainly if you already have a New 3DS or New 3DS XL. This does exactly the same thing as the New 3DS XL except it’s a bit smaller and doesn’t have 3D, so buying it will be a complete waste of time.

If you’re still rocking an old 3DS or 3DS XL, though, and you were looking to upgrade anyway, at £129 this is probably your best shout (again, assuming you don’t care about 3D) because it’s got everything the ‘New’ series offers but is £50 cheaper than a New 3DS XL.

And if I don’t have a 3DS at all and I’m now completely lost because there are six models now and I have no fucking idea which is best for me?

Then yer man Scullion is here to help with this useful patented* diagram.

Thank you Chris. I’m now completely informed. I have now realised that I want to buy a New 2DS XL / am perfectly happy with my current system (delete as applicable).

Happy to help, hope you enjoy it / glad I saved you some money! (delete as applicable)

In order that I could write this review, I received the hardware in advance from Nintendo. The content of my review and the opinions therein were in no way positively influenced by this.