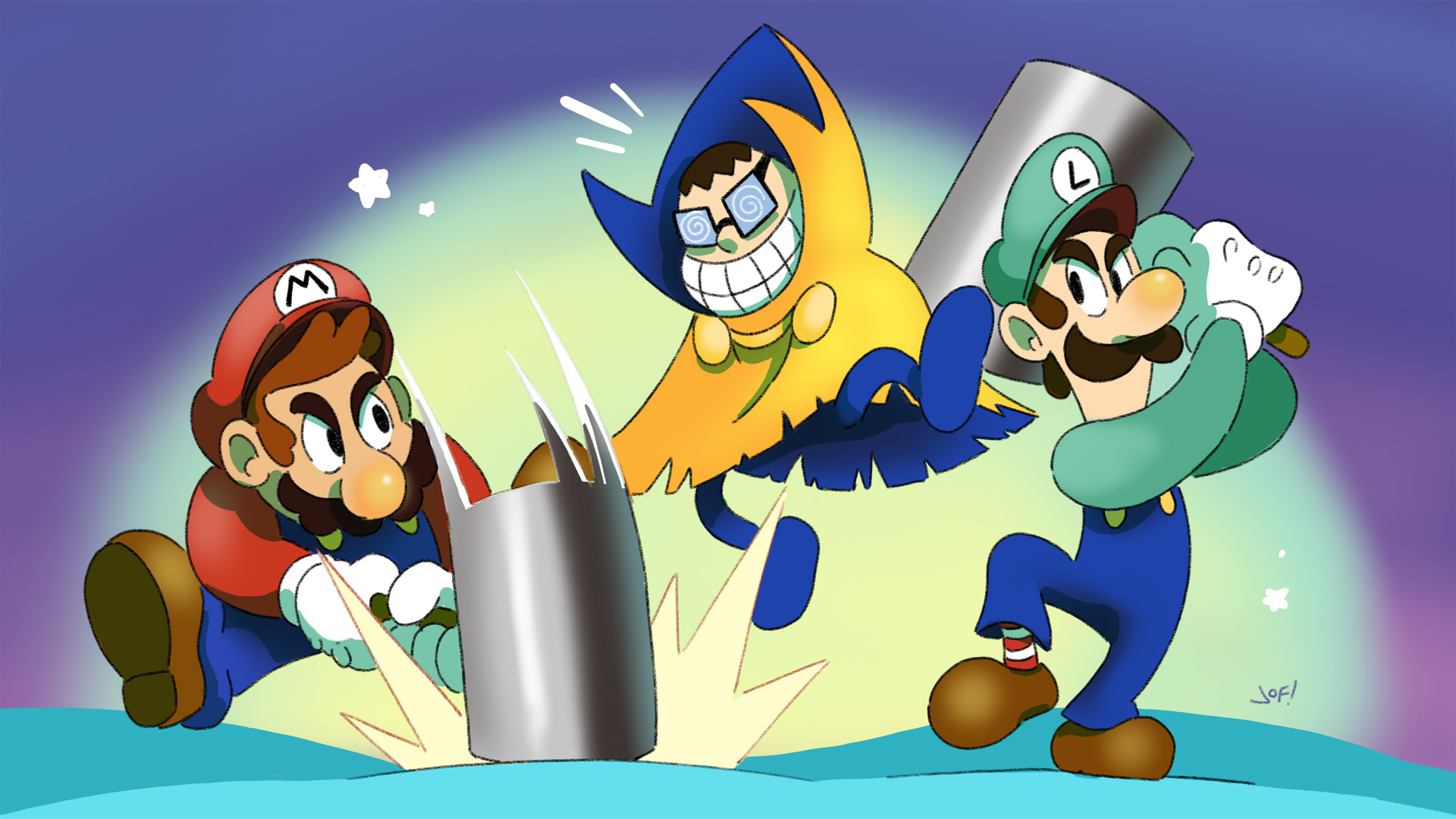 There aren’t many game series that manage to last more than a decade with the same developer intact, but AlphaDream has been rocking the Mario & Luigi games for 14 years now.

Although it continues to see critical success with each Mario & Luigi game released though, the fact that the first title in the series – Superstar Saga on the Game Boy Advance – is now nearly a decade and a half old means many of today’s gamers never got a chance to play it.

That problem has now been resolved with this 3DS remake of Superstar Saga, and it’s a testament to the 2004 release that so little of the core game has been changed here.

For those not familiar with the original, the story opens with the evil Beanish witch Cackletta and her assistant Fawful arriving at the Mushroom Kingdom as ambassadors from the Beanbean Kingdom.

It quickly turns out that their wishes are less than warm, as the pair steal Princess Peach’s voice and replace it with explosives. Which means shit gets literal any time she drops an F-bomb.

Dismayed at their Princess’s newly acquired pyrotechnic patter, Mario and Luigi decide to travel to the Beanbean Kingdom to give Cackletta and Fawful a swift kick in the beanbags and get Peach’s de-weaponised dialogue back.

Here’s the twist: accompanying them on their trip is none other than Bowser. He was planning on kidnapping Peach but now he can’t: if he did she’d no doubt utter a string of detonated dissent that would blow his castle to matchwood.

Deciding that the enemy of his enemy is his friend – if only until the job gets done – Bowser offers his help to Mario & Luigi and the adventure begins.

This will all be familiar to anyone who played the original Superstar Saga on the GBA, and to be fair there isn’t an awful lot here – at least in the main mode – that they won’t have seen before.

The vast majority of this game’s layout is the same as that of the GBA game – I even used a GBA walkthrough when I got lost at a bit I’d forgotten how to navigate after all these years – meaning those who’ve played Superstar Saga to death will for the most part know exactly what’s coming.

Even the dialogue remains by and large the same, word-for-word. Given how great Superstar Saga’s dialogue was, though, that’s a good thing: especially considering what I’m about to discuss further down the review.

So what’s actually different, then? Well, the main changes are more to do with the game’s graphical style: while it retains the same 2D perspective as the original the characters and environments are now far more detailed, bringing it more in line with recent 3DS Mario & Luigi adventures like Dream Team Bros and Paper Jam.

What this essentially means is that the standard pixel art sprites from the GBA game have been ditched in favour of pre-rendered characters, Donkey Kong Country style.

Whether this is better or worse depends on your own taste: personally, I can’t really decide, and not even watching a side-by-side comparison video by GameXplain, where I can see both versions at once, helps me definitively choose my favourite art style.

Other changes that can more objectively be considered improvements include the ability to use the touch screen for a number of different functions.

You can now easily flick between your special abilities and items by tapping them on the touch screen, instead of having to use the L and R buttons (which can get annoying once you’ve earned a bunch of them).

Even more useful is the ability to show the game map on the bottom screen. It’s an active map that tracks your character’s location and occasionally shows a marker to indicate where you have to go next, which makes getting lost much harder (though not impossible, hence my aforementioned sneaky walkthrough peek).

You also now have the ability to save anywhere with a new ‘Save’ button on the bottom screen. While undeniably useful, it does make the save points – which are still in the game – a bit redundant now.

In all, this is a solid enough remake of Superstar Saga, which many (including myself) still believe is one of the best games in the series. But that’s only half the story this time.

When you reach Beanbean Town – roughly a couple of hours into the game – you’ll unlock a brand new mode entitled Minion Quest: The Search For Bowser.

This is a never-before seen side story that takes place at the same time as the main Superstar Saga… um, saga.

It shows the game’s events from the perspective of a Goomba who fell from the sky after Fawful blew up Bowser’s Koopa Cruiser airship at the start of the game.

This brave young Goomba decides to form an army of other lesser Mario enemies that will head forth through the Beanbean Kingdom and rescue their master Bowser from whatever fate has befallen him.

You do this via a series of odd squad-based battles that mostly play out automatically in front of you with little interaction.

Before each battle you choose eight enemies to fight for you, including a captain. This can be the main protagonist Goomba, or you can scan a Koopa Troopa or Boo amiibo to get them as captains instead.

Once a battle starts your soldiers fight waves of enemies, and your actions are mostly limited to the occasional button-based special attack (which trigger at random) or a series of commands you can give: the latter use up Command Points so you should save them for special occasions.

AlphaDream has a reputation for adding odd gimmicks to its Mario & Luigi games with varying levels of success – the papercraft battles in Paper Jam, the giant Bowser battles in Bowser’s Inside Story, that sort of thing – and Minion Quest is another one that’ll divide opinion.

I did find myself getting drawn to it: there’s still something compelling about levelling up your squad and seeing if they’re good enough to take on the next batch of enemies.

But there’s no denying that a lot of this is just number crunching and for the most part you’ll just be sitting there watching enemies bump into each other and waiting for the odd prompt to press the A button or issue a command.

It doesn’t help that the writing in this mode is significantly poorer than that of the main Superstar Saga mode. Most of the jokes fall flatter than Holland and the whole thing just reads like any of the countless Mario & Luigi fan fictions that have been written by 14-year-olds over the years.

It’s an interesting diversion, and one you may still find yourself strangely addicted to like I was, but it would take a brave soul to consider it any more than a lesser add-on included to ensure what’s here is more than a straight remake of a GBA game.

Ultimately though, that straight remake is still the best part of what’s on offer, and there’s nothing wrong with that. If you know the GBA Superstar Saga inside out then your decision to buy this should really depend on how keen you are to play through it again because, cosmetic differences aside, it’s mostly the same game.

If you’re completely new to it though, it’s a must-buy. The new mode is a bit weak but the main RPG is just as funny and compelling now as it was nearly a decade and a half ago.

In order that I could write this review, I received a free copy of the game from a PR. The content of my review and the opinions therein were in no way positively influenced by this.

If you enjoyed these reviews and want to help me write them more frequently, please consider donating to my Patreon account.

Alternatively, if you’re a UK reader and can’t afford to support me on Patreon, please do your normal Amazon UK shopping via this link. Tired Old Hack is a participant in the Amazon Services LLC Associates Program, an affiliate advertising program designed to provide a means for me to earn fees by linking to Amazon.co.uk and affiliated sites.